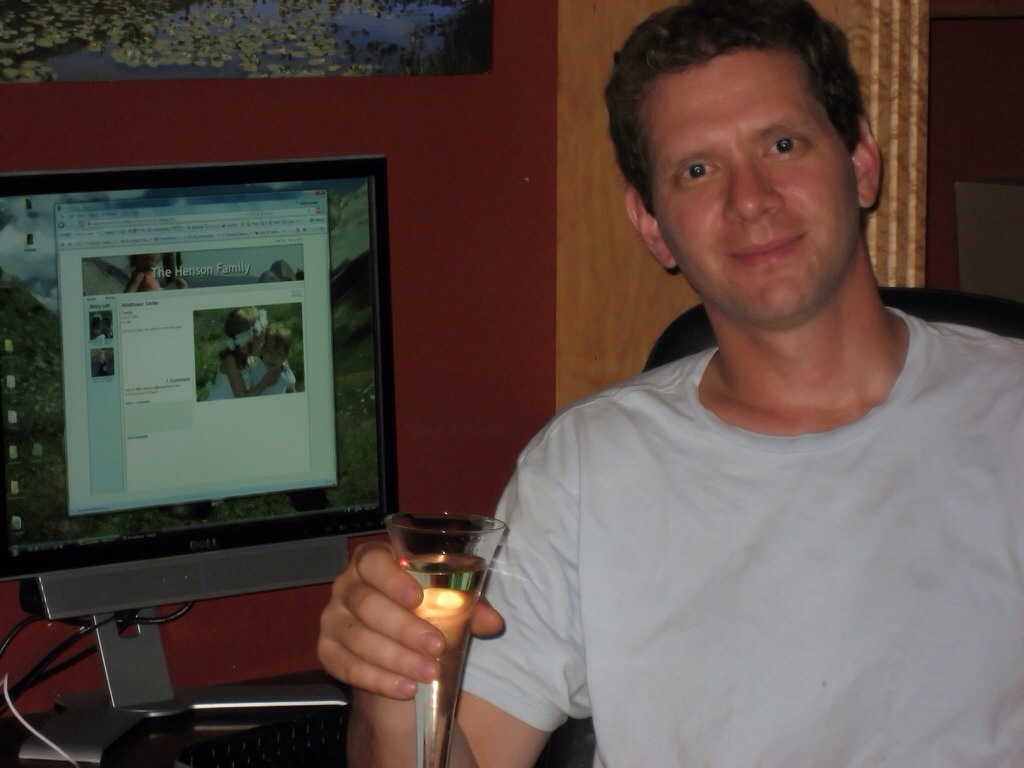 LiveMosaic was Matt’s private family website start up business. It is an honor to know that I was the inspiration for his business. Since Summer was born I have maintained a family website for stories and pictures. In 2003, I started a self hosted WordPress blog. Matt liked that I did it. I never realized how much he liked it until he started talking about making a business out of it. He felt that everyone should be able to have a website like the one I made for our family, that it should be easy to use, that it should be private and the content protected, and that everyone should have their own domain name. I think it was 2007 that he started thinking about it and it was the fall of 2008 that it went online.

He started out with a few people helping him, including a developer, and he searched out advice. The strategy was to invest a little money himself and bootstrap his way through. Since 2008, LiveMosaic took the place of any hobby he might have had. He worked hard on it and eventually became the sole person working on the project. From the beginning he had a very slow trickle of customers which increased slowly to about one new customer a week. He was obsessive about customer service and he was always looking for the feature that would be the break through to getting more customers. With background uploading (which didn’t really exist at the time) and true high definition video before YouTube had it, LiveMosaic was a really high quality product. Unfortunately, I never felt like it got beyond a niche market and that apparently, no one really wanted what we wanted in a family website.

I considered myself an investor and primary support so that Matt could pursue his dream. When I think back about the experience of having a family business a lot of thoughts flood up, but really no strong emotional nostalgia for the business. I think maybe I was good at supporting Matt but not such a good business person. I know I hoped that a steady increase in the number of customers would eventually mean financial stability even if it wasn’t a money maker. Running the business did not cost that much anyway, except in time. But I also tend to have a strong sense that if no one is going the direction that you want them to, then the direction you want to go is probably not the right one. I think this was definitely the case by the end of 2010 when Matt started to think about selling LiveMosaic as a service for photographer websites.

I always thought LiveMosaic was an awesome product. There is such a heap of trash on the internet, that I will always make it a point to support sites that are high quality and have an aesthetic like what we had with LiveMosaic. I’m sure I have many more thoughts to post about LiveMosaic, but I wanted to give a simple overview of what Matt did. It was such a large part of his life for several years. Just for a moment, I wonder where it would be now if he were still alive, as it comes to five years since it went online. 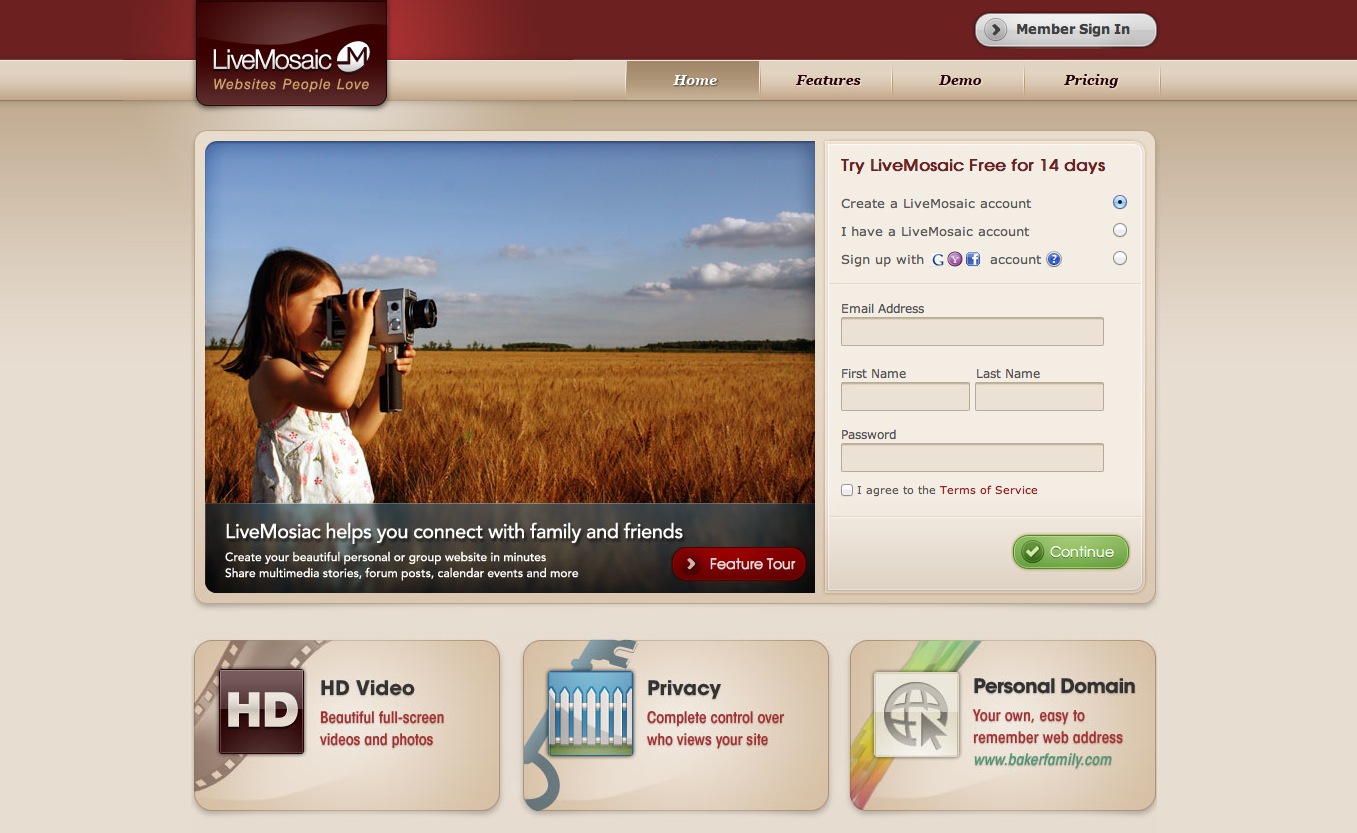 In an email introducing LiveMosaic:

Business Plan. I’ve got a lot of this but very little of what is on paper is current. I’ve enclosed scope and strategy documents from when the working name was “circle.com” Things have changed quite a bit but this is probably still helpful. The enclosed Biz plan is more current (just ignore the schedule).

We don’t have any technical documentation except for code and comments. That’s something that we’ll need to fix as the development team grows.

UI – There’s a storyboard but it’s on paper (flip charts). At this point everything on the storyboard is in the design. We’re just fixing bugs and making enhancements as they are requested. Once we’re ready to start adding the next wave of functionality we’ll need to go back and update the plan.

AWS – We’re using:
EC2 (small instances. One for production and one for test. As we grow we’ll either need to move to larger instances or start load balancing across multiple instances).
EBS. We use this to store our application, user data and the database
S3. We just use this for backup and to store instance images
We aren’t currently using SQS, the DB, dev pay, etc.
In addition to Amazon’s offerings, we are also using RightScale’s management front end.
A consultant sort of half set up MySQL replication and failover and Scalr elastic scaling. We can get him to finish the job when we need it.
Programming Languages:
The App server uses:
Base Application Framework is TurboGears 1.0
TG is a Python-based framework – see this http://www.turbogears.org/about/
We’ve replaced many of their components:
We’re now using SQLAlchemy for the ORM, MySQL DB, Genshi Templates
There is also a video encoder application that runs python.
It also calls a BASH script that handles calling the various encoding tools (FFMPEG, etc)
Both of the server apps are managed with Supervisord
On the client side, we use:
jQuery and its plugins for just about all javascript.
SWFUpload for the multi-select uploader
Slideshow Pro for the video/image slideshows
We haven’t tested in chrome. From what I hear, it’s not quite ready for prime time. But it will be eventually…

There are many areas where you could take ownership. The trick will be to find something that’s important enough to require your skills, but that isn’t so urgent as to preclude a ramp up. It would also be good if most of its complexity were not already completed, so that you can really own it. I’m thinking that the LiveMosaic site might be a good candidate.

As I mentioned, we’re also behind on test…

I have extensive experience leading teams that build innovative products. In the past I have worked on multimedia semiconductor systems on a chip, embedded multimedia firmware, RF receivers, digital basebands, digital power conversion, multimedia web applications and software planning for the enterprise space. I speak architect, strategic marketing, ASIC engineer, software developer and a web developer.

Specialties: Value innovation, strategy, leadership, marketing and getting down in the trenches to get things done.